Rule: word families based on common words, showing home words are related in form and meaning.

Can you write each word into a sentence?

Today, I would like you to follow the link below to access work on how to coordinating conjunctions . You will also be learning about the greater bulldog bat. Remember to watch the video before completing the tabs marked the grammar bit and whiteboard challenges. If you would like to challenge yourself further you can continue with the writing ideas. I am looking forward to seeing the work that you produce.

- Why do you think the character who took Jim is called 'Grimy Nick?'

- What evidence is there to support this?

Coal boats were very important in the Victorian era- they were used as the popular way to travel and would also be used for work. In the Victorian times the steam engine was developed and coal boiled the water which powered the steam.

Activity- Using chapters 12- 15 I would like you to write a play based on these chapters.

- Which characters are involved?

- What is happening in those characters?

- What speech can you include that isn't in the story? Think about what is happening in each chapter and keep it similar to the book.

- What features should you include in a play?

Remember: stage directions, who is talking and how they are saying it etc.

Starter- Set yourself a timer for 5 minutes and try to complete as many questions as you can in that time.

Remember you can access your Times Tables Rockstars account at any time to practise your times tables.

Main Activity- Today you are going to be answering questions based on the mean (average). Hopefully you will remember from Mondays lesson how to find the mean but if not you need to:

- Add all the values together

- Divide by the amount of values given

I have attached the PowerPoint below again to help you if you need another reminder.

Work through the questions carefully and show your working out.

Last week we started learning about what schools were like in Victorian England. Today we are going to continue with that and learn more about the rules teachers and children had to follow and the punishments that they would have if they had broken the rules.

- Do you think the rules were stricter in Victorian England compared to now?

- What rules do you think they would have?

- What do you think to those rules?

- Do we have similar rules now?

- What do you think would happen if a child broke the rules?

Watch the short video below and look at the punishments on the PowerPoint below.

During the Victorian era teachers also had a set of rules that they had to follow.

- Do you know what these rules were?

- Do you think it is fair for them to follow rules?

- What do you think these rules are? 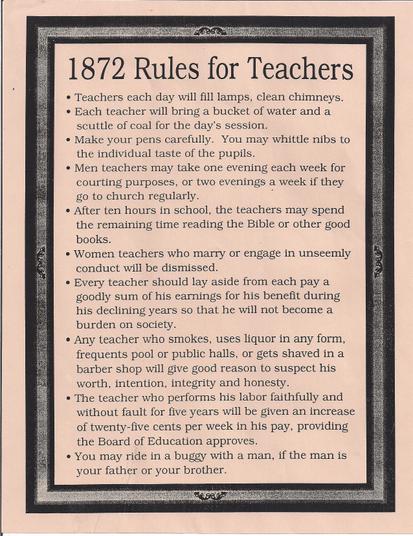 Design a poster showing a range of rules that children had to follow in Victorian times. Think of new punishments for each broken rule.

Unfortunately not the ones with chocolate chips.

Some cookies are necessary in order to make this website function correctly. These are set by default and whilst you can block or delete them by changing your browser settings, some functionality such as being able to log in to the website will not work if you do this. The necessary cookies set on this website are as follows:

Cookies that are not necessary to make the website work, but which enable additional functionality, can also be set. By default these cookies are disabled, but you can choose to enable them below: